Painting > This Is My Home: Stories of First Generation Immigrants 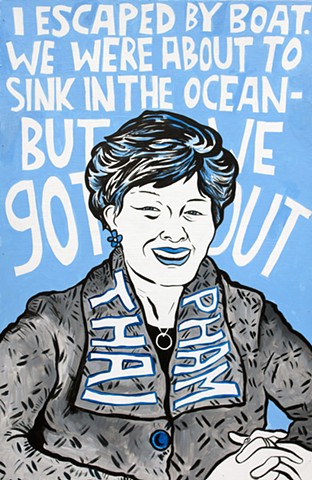 THAI PHAM was born in Thai Binh in North Vietnam in 1944, but her family relocated to South Vietnam after the Communists invaded in 1954. She eventually left the country by boat, fleeing from Saigon to the port of Vung Tau with her niece and nephews because their parents had already escaped. She made many attempts to get out of Vietnam and finally succeeded in 1989, when she was granted refugee status and allowed to emigrate to the United States. Pham had training as a nursing assistant, and found work as an in-home aide. “I was very lucky,” she tells me, “that I had picked the right education.” Pham is grateful for the way that the United States takes care of elders, and she loves socializing with friends at programs offered by the SeaTac Senior Center, Club Bamboo, Refugee Women’s Alliance (ReWA), and the Salvation Army. She sometimes misses specific landscapes of her childhood, but tells me that the US has given her opportunities she never would have had in Vietnam. “In my country, you have to buy your house all at once— not pay it off in little bits like here,” she tells me. “So I asked myself: I don’t have a family or a husband or children, how can I get a house? And I worked seven days a week, 24 hours a day—and I got a house.”